I’m repeating a blog I wrote earlier this week for the PowerPoint Team Blog. I don’t usually cross paths on content, but I hope you’ll forgive me this one, personal moment. -Ric

Pardon me for a somewhat personal departure from our usual topics, but I think it’s important to note that Brian is no longer here to help us continue developing new versions of PowerPoint for you.

Brian Reilly passed from this world last week.  Brian was a PowerPoint MVP; a Most Valued Professional.  And you really should have known Brian. 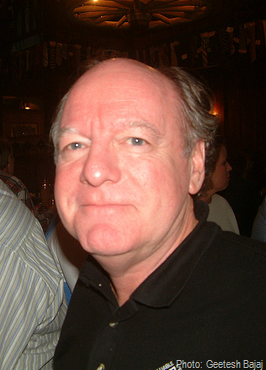 In 2002 I took on the responsibility for managing the PowerPoint team communications with our MVPs.  This was not a reward, we had a pretty rocky relationship with the MVPs at that time, mostly because no
one on the team had really spent any time figuring out what the program was about or how we might profit from the relationship.  That’s changed a lot over the years, but at the time it was a somewhat frightening
assignment.

Most vocal among the PowerPoint MVPs was a guy
named Brian Reilly.  He had the reputation of being rude and annoyingly persistent, and of not taking no for an answer.  His mails, the only contact I’d had with him, were very blunt in telling us where we’d gone
wrong in developing the product.  I set up our first MVP group phone conference with more than a little concern about what Brian would say.

The meeting started and after a few minutes of listening I realized one thing about Brian. It wasn’t that he was willfully rude or abusive.  He was just a “typical New Yorker,” and there was nothing really personal in his assessment of our situation.  I realized I could deal with this,
and we went on to develop a really productive and enjoyable relationship.

Brian was loved among the MVP program, in the way you can only love a paradox.  Impish and mischievous one moment, dead serious and analytical another, and always looking to make sure everyone was taken care of, that no one was left behind, left out, or unrecognized in their achievements. 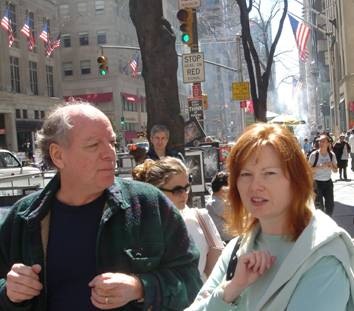 Brian with Debbie Bretschneider in NYC

In the last couple of years New York city has become a personal
favorite vacation spot for my family.  Brian showed up on our first day
there teach us the city, walking us up and down the streets and
avenues, explaining how they worked, how to ride the subway, how to get
lost in Greenwich Village.  To this day my son still quotes Brian about
how “in New York, it’s dinner time when you want to eat dinner.”

I miss him already, and the thought that I will no longer get his
insights and advice, or be the subject of his jokes or pranks… will
have its effect for quite a while.

You should know Brian was a fierce advocate for you, the PowerPoint user.  Your work in
PowerPoint is made easier because he was just such a unique person. I’m
sorry that most of you never had a chance to meet him, or thank him.

Brian is survived by his brothers Joe and Bill, and his sister Mary Horton.
Those of us who knew Brian will be observing a minute of silence on
Sunday the 28th, 8am Pacific in Seattle and California, 11am Eastern
Daylight in New York and Cincinnati, 4pm British Summer Time in London
and Surrey, and 8:30pm Coordinated Universal time +5:30 hrs in Chennai,
India.

If you have the opportunity to join us for that moment, wherever you are, please do.